In response to the public health crisis and its particular toll on New York City's overburdened hospitals, Venus Over Manhattan is proud to announce an online exhibition of vintage prints by Peter Saul, the proceeds from which will directly benefit the Brooklyn Hospital Center's COVID-19 Fund, and the Elmhurst Hospital Center. From Tuesday, April 14th, through Saturday, April 20th, this online viewing room will host a selection of Saul's most iconic graphic works. At the end of the presentation, all proceeds will be grouped and donated directly to the Brooklyn Hospital Center and the Elmhurst Hospital Center, directly funding medical professionals and their ability to provide life-saving care.

The presentation comprises works produced between 1968 and 1975 — the same period during which Saul produced his most celebrated works, depicting the savage brutality of the Vietnam Era — and these editions testify to the strength of Saul's madcap visual language, which he developed over his fifty-year long career. With two major retrospectives of his work currently on view, at the New Museum of Contemporary Art in New York, and Le Delta in Namur, Belgium, the prescience of Saul's riotous vision becomes ever more clear. In conjunction with this presentation, Peter Saul has recorded short descriptions of each work included in the exhibition, which can be heard by clicking on the audio files directly next to images of the works. 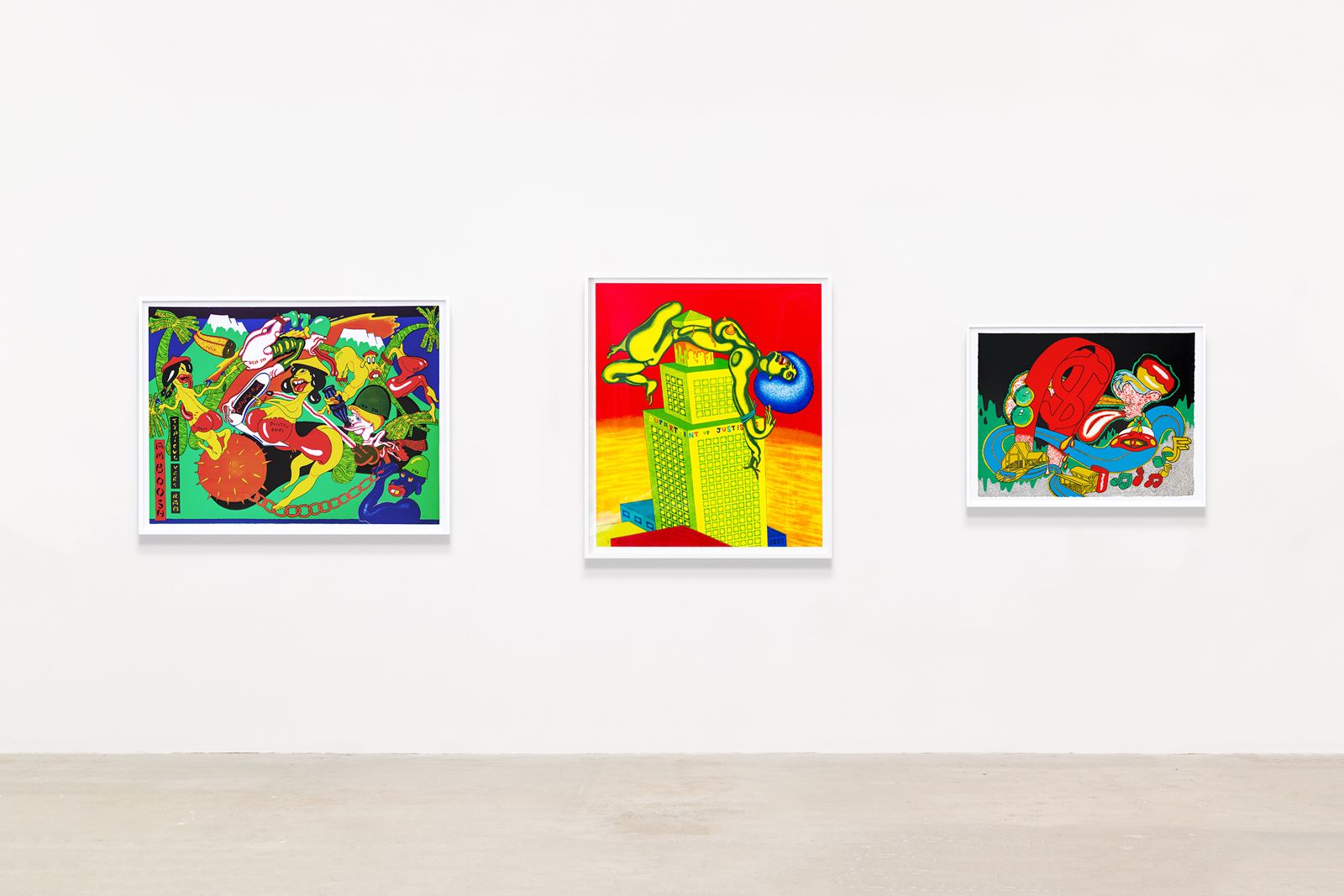 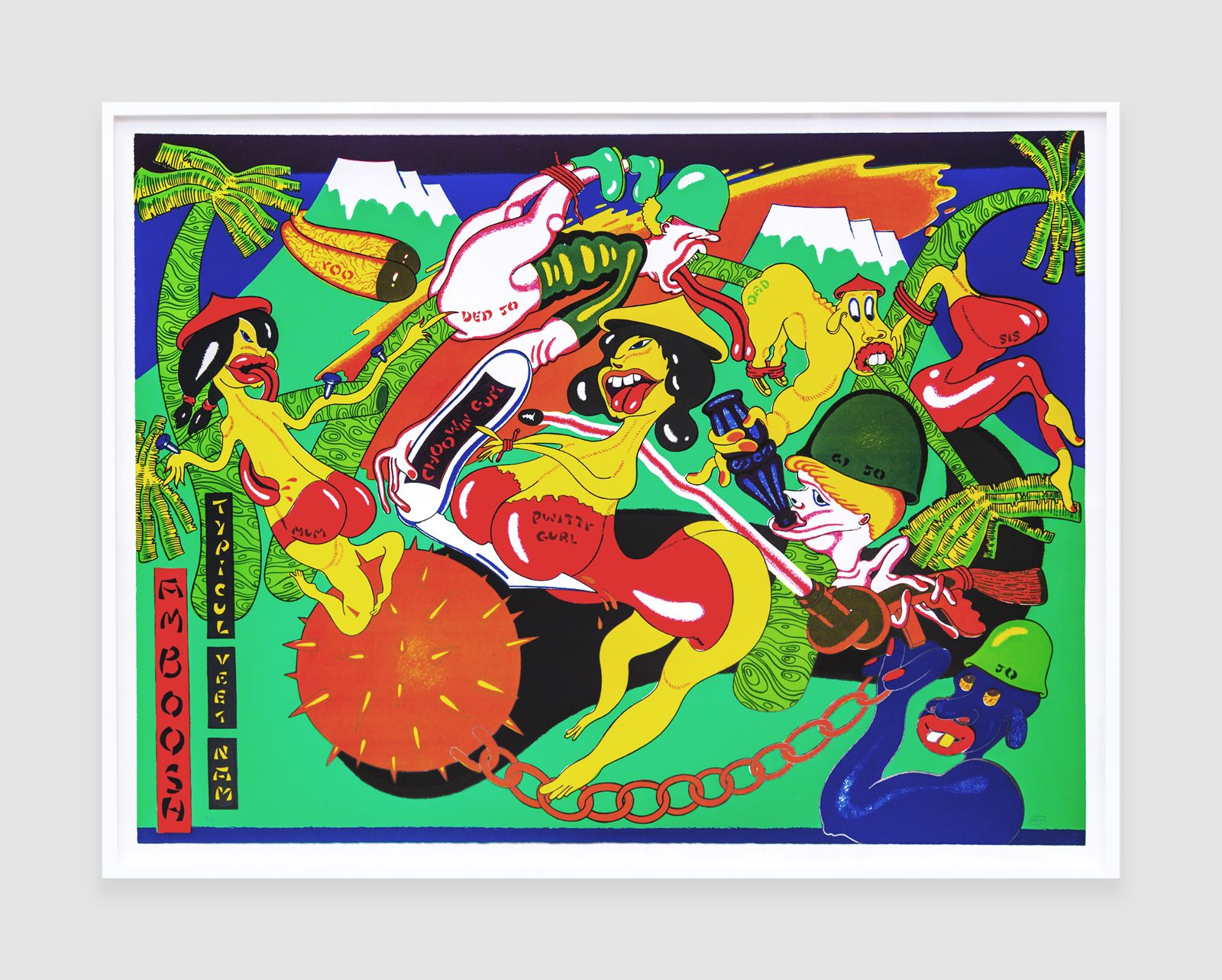 Listen to Peter Saul describe Amboosh in his studio on, April 14th, 2020
Amboosh is Peter Saul’s most important print, published in a small edition of 50 with 9 APs. The work relates directly to Saul’s most widely-celebrated paintings, depicting the atrocities and horrors of the Vietnam War, and specifically references his painting Saigon (1967), held in the permanent collection of the Whitney Museum. Described in calligraphic lettering toward the print’s margin, the work illustrates a “Typical Vietnam Ambush,” with a cast of characters incorporating American Green Berets, three Vietnamese women, and a strange artillery of medieval weaponry. Engaged across an incredibly dense composition of interlocking limbs, the figures engage in a comically intense battle, where bullets fly and maces swing towards figures notable for their representational adherence to complicated stereotypes.
Other examples from this edition are held in the collections of the Blanton Museum of Art (Austin, Texas), the Cincinnati Art Museum, the Krannert Art Museum (Champaign, Illinois), the Milwaukee Art Museum, the Whitney Museum of American Art (New York, New York), and the Yale University Art Gallery, (New Haven). 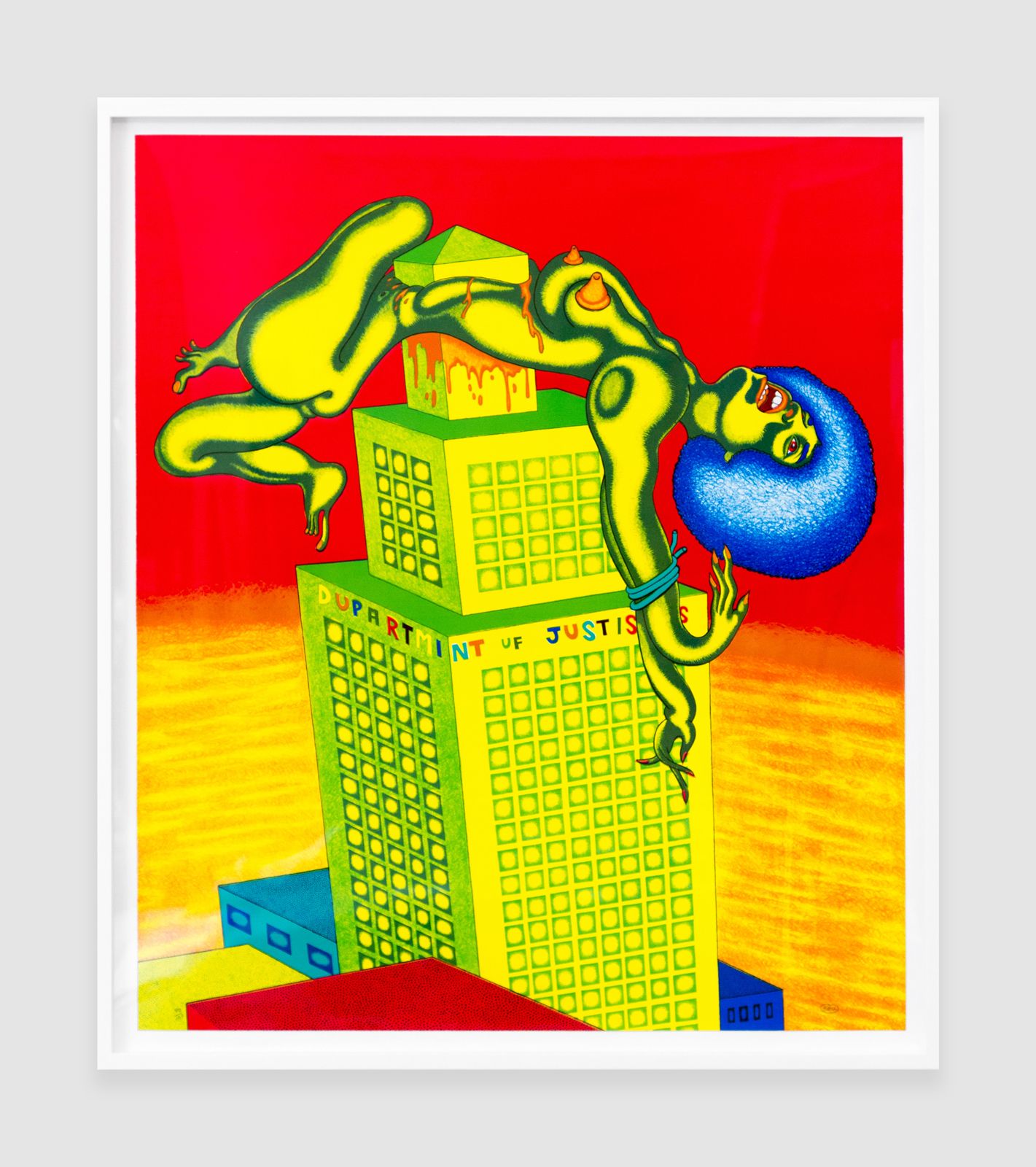 Listen to Peter Saul describe Angela Davis in his studio on, April 14th, 2020
Angela Davis is one of Peter Saul’s most important prints, featuring his eponymous subject impaled by the tower of the iconic Oakland Department of Justice Building. Never one to shy away from difficult subject matter, Saul’s depictions of hot-button issues are often ecumenically critical, lampooning the political left as often as they criticize the conservative right. Produced the year before his major painting Crucifixion of Angela Davis, which is currently on view in Saul’s retrospective at the New Museum of Contemporary Art in New York, this work produced at the very moment when Davis was on trial and ultimately acquitted in 1972.
Other examples from this edition are held in the collections of the Art Institute of Chicago, the Blanton Museum of Art (Austin, Texas), the Milwaukee Art Museum, the Whitney Museum of American Art (New York, New York), and the Yale University Art Gallery (New Haven). 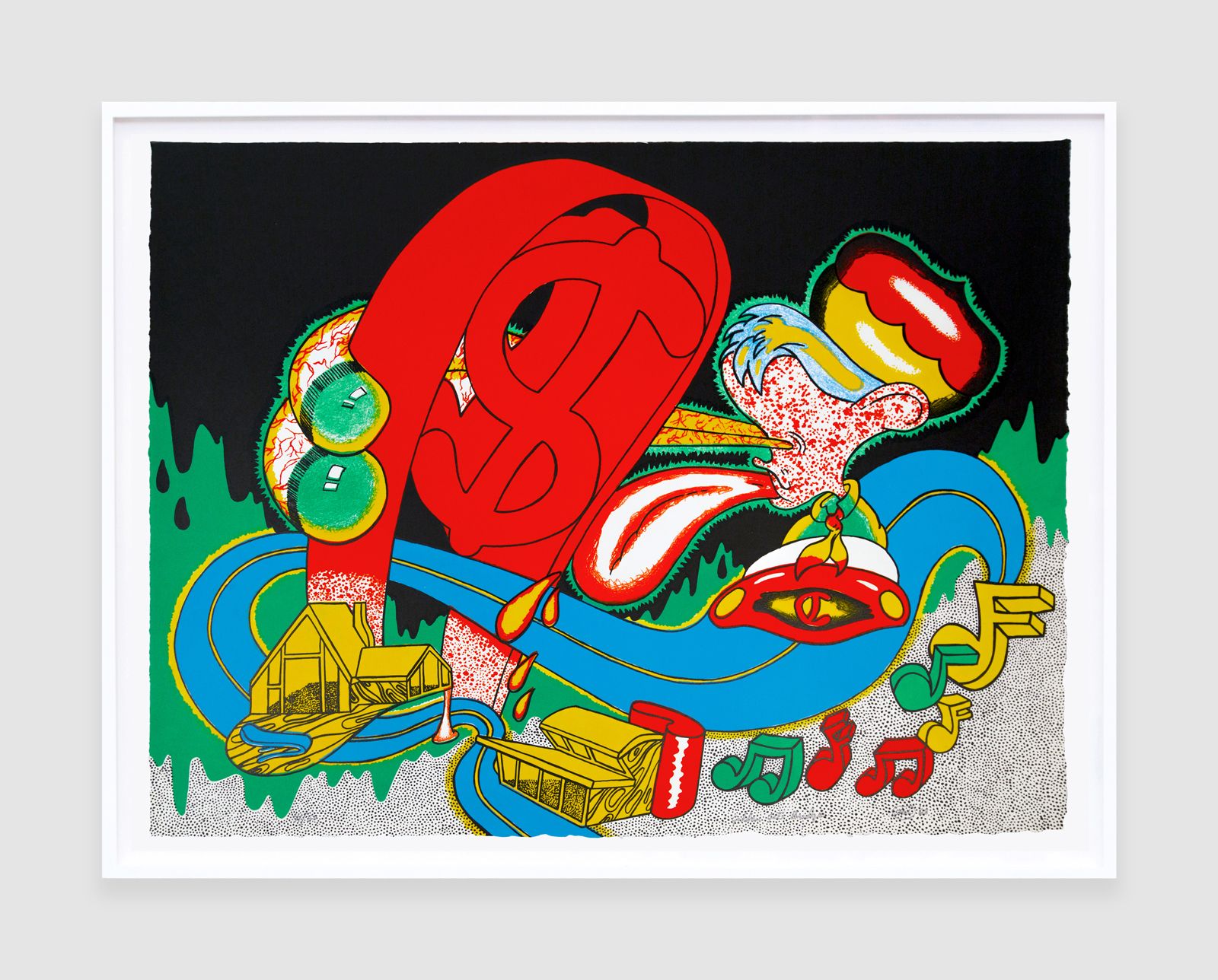 Listen to Peter Saul discuss Golden Gate Bridge in his studio on April 14, 2020
Golden Gate Bridge features a young man wearing a crown driving himself over the bright red bridge that connects San Francisco, represented by a suite of colorful musical notes, and Marin, depiced with a pair of angular, cookie-cutter suburban homes. Peter Saul was raised in San Francisco, and frequently incorporated imagery from his birth city into his compositions. Rendered in his signature style that blends comic book references with compositional rigor, Golden Gate Bridge touches on many of Saul's most important themes, including suburbia, politics, money, and power. Published in an edition of 50 by Collector's Press in San Francisco, this print relates to a painting called "Golden Gate," which Saul produced in 1966.
Other examples from this edition are held in the collections of the Art Institute of Chicago, the Blanton Museum of Art (Austin, Texas), and the Museum of Contemporary Art, Chicago.

About the Brooklyn Hospital Center

"The 175-year-old hospital — where Walt Whitman brought peaches and poems to comfort the Civil War wounded and where Anthony Fauci, the White House adviser who is now America’s most famous doctor, was born — is scaling up, as Gov. Andrew M. Cuomo has required all New York hospitals to do. The city, now the epicenter of the outbreak in the United States, had reported more than 20,000 confirmed infections and 280 deaths as of late Wednesday [March 25th, 2020].

Licensed to treat 464 patients, the Brooklyn medical center typically has only enough staff and beds to handle 250 to 300. It is planning to increase that number by half if needed, but it may have to double it."

Gifts to the Brooklyn Hospital Foundation’s COVID-19 Fund will support nurses, physicians, residents and support staff working on the front lines to care for patients who desperately need our help.

The Brooklyn Hospital Center is an independent community hospital that serves some of Brooklyn’s neediest families. This means that our hospital already operates on a razor-thin margin. We are committed to serving our community and all of those impacted by COVID-19. However, the current crisis has placed tremendous strain on our limited resources.

Gifts to this campaign will help offset the cost of staff hours, screening services and will help us purchase critically needed supplies, such as N95 masks, surgical masks, gloves, face shields and other important personal protective equipment (PPE).

About the Elmhurst Hospital Center

Elmhurst Hospital Center opened in 1832 and moved to its current Queens location in 1957, making it one of the oldest hospitals in New York City.

Queens accounts for 32 percent of New York City’s confirmed coronavirus cases, more than any other borough and far more than its share of the city’s population. It also has fewer hospitals. Elmhurst is one of three major hospitals serving a large population and is centrally located, which in part explains why it is busy in normal times and even busier now."

The proceeds generated from this online exhibition will be donated directly to the Elmhust Hospital Center to support their medical staff, and purchase much needed personal protective equipment (PPE).